Here's a list, in no particular order, of 25 songs that rocked my world in 2009. In my humble opinion, all of them are worth a listen. 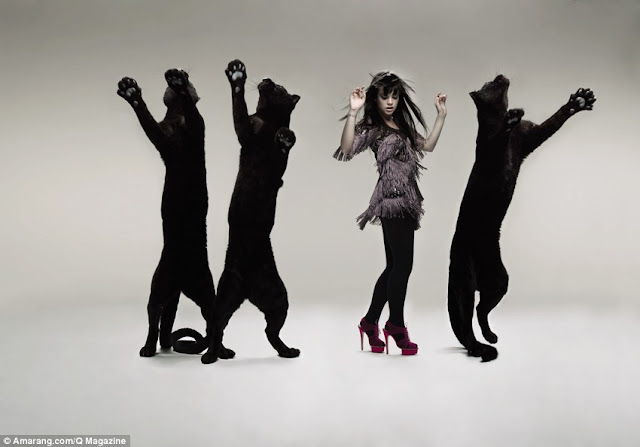 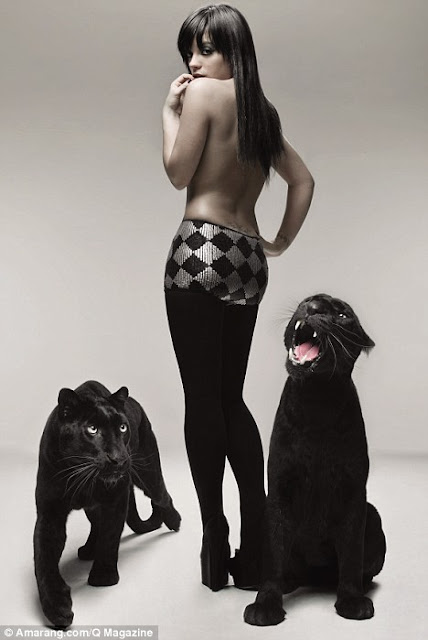 photos from dailymail.co.uk
Tags: best of

In the tradition of music bloggers everywhere, I've put together a series of posts to commemorate the end of 2009 and the end of the 2000-2009 decade. Here's the first list, not ranked in any order - 30 great albums of 2009. 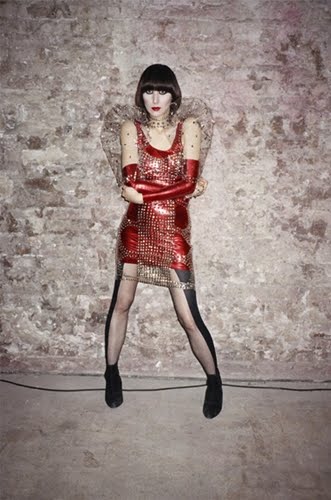 photo from yeahyeahyeahs.com
Tags: best of

Happy Holidays one and all!

Back when I was a little kid with a budding passion for music, I used to get a lot of music at the local library. I'd flip through the Rock albums, borrowing anything that I'd thought I'd remotely heard of or anything that I thought looked cool. One time I happened upon David Bowie's Scary Monsters (and Super Creeps) album. It met both criteria since I had heard of David Bowie and the cover sure looked cool. 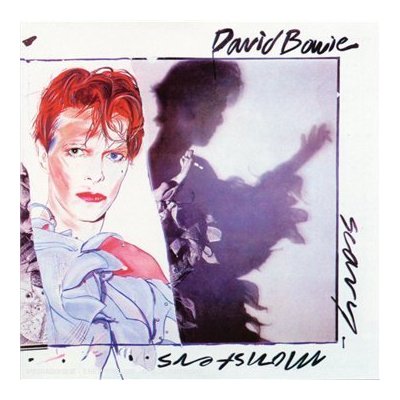 Then I listened to it.

This album had some very cool music on it. From screaming Japanese lyrics to space age sound effects, all with really cool songs. You're probably familiar with tracks like "Ashes to Ashes", "Fashion" and the title track. One song that's always been a favourite of mine, and that's never been a big radio hit is "Up the Hill Backwards". It's a driving rock song with cool dynamics, great guitar work and an interesting lyric. Still one of my faves many years down the road.

Obviously Still Life Still are pretty cool since they've got Broken Social Scensters Kevin Drew and Brendan Canning introducing them in their video... The tune's called "Pastel". The album's called Girls Come Too. Who knew? You can pick up the album at emusic.


A new video from Muse? You bet. Here's "Undisclosed Desires" from The Resistance.

Here's The Crystal Method with Emily Haines from Metric with a tune called "Come Back Clean".


Fun. with "All The Pretty Girls". These guys are totally channeling ELO on this tune. Their album Aim and Ignite is on emusic. Fun indeed.


Here's Julian Plenti with the awesome track "Games for Days" from his Julian Plenti Is... Skyscraper album. It's on emusic if you're interested. It's been out for a while now, but I just wanted to feature this track. It makes me look forward to the new Interpol album due in 2010. And yes, that's Emily Haines in the video.

I first heard Stars when 2006's Set Yourself on Fire was released. I love this album front to back. It's a magnificent album with captivating tales, beautiful melodies and sprawling instrumentation.

Here's the video for "Your Ex-Lover is Dead",

I attended Metric's first of two shows at Toronto's Massey Hall on October 20. The Stills opened the show.

Overall, it was a good show. Not fantastic, but good. There are a couple of things that led to this assessment. First, let me be clear that I like Metric a lot. From the first time I heard tunes like "Combat Baby" I was hooked. It's been great to watch the band gain more and more popularity. 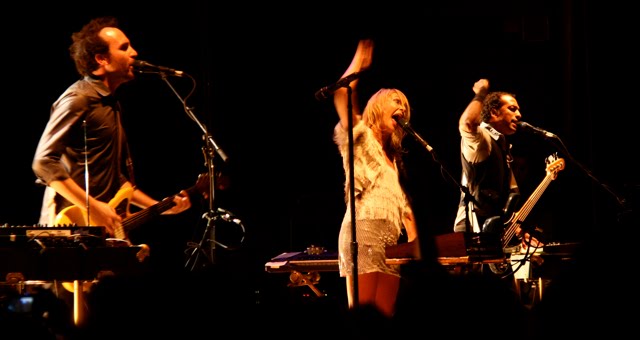 The first thing that led to the not-so-great impression of the show was the seats. I got "Front of the Line" seats from American Express. Well, I may have been at the front of the line, but I certainly wasn't front row. The seats were three rows from the back of the house, in the second balcony. The only good thing you could say about these seats would be that they were head-on to the stage. The other thing about Massey Hall seats is that they are tiny. I'm not a big guy, but I felt completely wedged into my seat. I was so happy that two seats next to my friend and I were empty so we could spread out from our neighbours a bit.

Then there was the show.

The Stills strike me as a good band. I liked the "Still in Love Song" from the first time I heard it and picked up their first album, 2003's Logic Will Break Your Heart. "Lola Stars and Stripes" was pretty good too. The rest of the album never really managed to make an impression on me. Same with their second album, Oceans Will Rise. They didn't win me over with their fairly bland live show. The songs all seem to blend into each other and nothing about them really stands out.

Metric put on a much more impressive show. Their stage presence was what you would expect from a band as experienced as Metric. They seem to be growing into the larger venues quite nicely. I will say that there seemed to be something more "rehearsed" about their show as compared to many of the other bands I saw over October. Certainly this is somewhat due to the larger venue, but it felt like Emily was likely doing the same moves during the same songs every night.

Song highlights for me were "Dead Disco" and the cool acoustic, sing-along final encore tune of "Combat Baby" from Old World Underground, Where Are You Now. Tunes from Fantasies such as "Help, I'm Alive", "Satellite Mind", "Gimme Sympathy" and "Sick Muse" as well as "Poster of a Girl", "Empty" and "Monster Hospital" from Live It Out were highlights, too. "Stadium Love" kind of fell flat for me since it seemed like Emily was trying a bit too hard to sell Massey Hall as a "Stadium", which it certainly isn't.

Overall, a really good show that was hampered by lousy seating and an opening act that didn't warm up this audience member.

Here's a video by someone with much better seats than me at the same show. Wow, I've really got to work on this whole "bitter" thing, don't I?

Emusic has albums from both Metric and The Stills, although they don't have The Stills' first album, which I swear I originally bought from emusic.

New Album from Tegan and Sara, Sainthood, Out Now 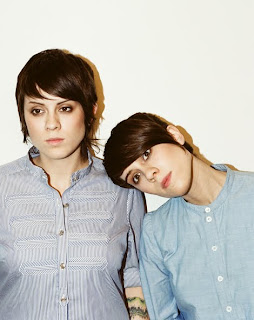 Tegan and Sara have taken their time growing on me. There have been some hits, like "Back in Your Head" from The Con, and "Walking With A Ghost" and "Speak Slow" from So Jealous. And some misses. Their new album Sainthood came out a few weeks ago and the first single "Hell" has a video. Here they are performing the song on Conan. Tight performance.

Their previous album, The Con, is available on emusic, but their new one isn't. Did they switch to a major or are they still on an indie that wants to grab as many sales as possible from iTunes first?

A few more tunes from the new album are up for streaming at their myspace.

I have fond and long-ago memories of "Pretty Persuasion" from REM's Reckoning album. I believe I first heard it on Q107 in Toronto. A very early and very different Q107 from what it is today. Back then, Q107 played more modern rock and CHUM-FM played hard rock. Now CHUM-FM has an easy listening format and Q107 plays classic rock.

Back to the song... It's a wonderful pop gem, with an easy going beat, nice strummy guitars and soaring vocals and harmonies. Never mind the fact that you can't understand half of the lyrics. Hearing bands like REM and U2 in the early 80s blended with the hair metal I was listening to since I discovered KISS morphed together and made me the music fan I am today. Not too much of a stretch to see how I ended up being a fan of bands like Husker Du, Dinosaur Jr., etc.... All in all, if a song has passion and drive with a unique view of the pop song, I have a chance of liking it.

Join with me in flashing back to 1984 with a long favourite, REM's Pretty Persuasion.

Here are few tunes that have made my ears happy recently... 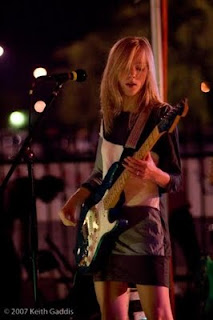 Ume is a hard rockin' trio with a cute-as-can-be guitarist/singer. Here's the video for "The Conductor" from their Sunshower EP which is up at emusic.


Fake Problems with "Diamond Rings" from the It's Great to be Alive album. Fake Problems' music can be found on emusic.


Here's The Raveonettes' new single "Last Dance" from their new album In And Out Of Control, which is available from emusic.