Here's a great, classic performance by Arctic Monkeys on SNL. What a great young band they were. The track is "A Certain Romance" from their 2006 début Whatever People Say I Am, That's What I'm Not.

Cold Cave - Villains Of The Moon

I was just surfing around and found this song by Cold Cave.  I remember seeing an album of their's on emusic several years ago.  I'll have to seek out some more of their stuff.

I posted a few months ago about Jamie N Commons. Classic sound with gritty soulful vocals. This is his latest, "Devil in Me".

Passion Pit are coming out with a new album this summer. Here's the first track for your sampling pleasure. The album, called Gossamer, is out July 24.

If you're new to Passion Pit, here's "The Reeling".

Last month, Todd Simko from Pure passed away. A friend introduced me to Pure when their Purefunalia album came out in 1992. I became an instant fan. I enjoyed lots of their tunes, but sadly, there aren't many available to post here.  I'll have to stick to the most popular - the great tune "Blast".

Ladyhawke put out a great 80s influenced, self-titled album back in 2008. She's got new material coming out, as evidenced by this track "Anxiety" premièred on NME and some more from Soundcloud.  The album, Anxiety, is out May 28.

And in case you've never heard it, here's "My Delierium" from her 2008 début.

As I'm sure you've heard by now, Nigel Godrich, producer of the little-known band Radiohead, has his own band. It's called Ultraista and here's the video for the track "Smalltalk".

Bob Mould has posted the first three tracks from the first 20th anniversary performance of Copper Blue in its entirety.  Get them now!  Awesome!

And if that weren't enough, Merge Records is reissuing the entire Sugar catalog on July 24.
Tags: bob mould, favourites, sugar

Gaz Coombes, frontman of now-defunct Supergrass, has a new album called Here Come the Bombs. It came out yesterday in the UK and maybe today in North America.

You can check it out here:

And if you're not familiar with Supergrass, here's probably their most popular song, "Alright".

It's a beautiful day outside

It's not exactly the first day of spring, but it's a beautiful Victoria Day weekend, and "it's a beautiful day outside - the sun's full in the sky". Here's The Gandharvas with "First Day of Spring".

Get out there and enjoy it!
Tags: gandharvas

At some point in my exploration, I happened upon Birmingham four-piece Peace. Here's their video for "Follow Baby" and a track called "Bblood". Cool sounding band.

Band of Skulls have put out a couple more videos from their most recent release Sweet Sour.

and "Sweet Sour".  Love that "kicking the amp with spring reverb" sound at the beginning.

Here's video of them on Letterman with a Dave-pleasing rendition of "Sweet Sour".

And finally, here's a documentary on Band of Skulls.

A friend recommended Darlings of Chelsea to me. Cool, powerful, rock. They're such a breath of fresh air that I'll forgive them for having their web site play music for me without asking.


"Devil is a Woman".  I personally always thought she would be.


Their latest album is Panic is Worse than the Emergency.  You can listen to it here.


Do you think they know/care that they share a name with a furniture company?

Here's a lovely track from Regina Spektor's forthcoming album What We Saw From The Cheap Seats. It'll be available May 29.

All you have to do is trust me and click here, right here, don't worry it will be fine. Just click here.

In case you missed it, I posted her video for "All The Rowboats" here. Not there, but here.
Tags: new releases, regina spektor

Wintersleep have a new album coming out June 12.  It's called Hello Hum and they've put out two new songs for our sampling pleasure. So sample away. You can even download "Resuscitate".

Here are a couple of other Wintersleep tracks, both from their debut, Welcome to the Night Sky.

When I was in high school, I wanted to form a band and call it Big Tonka Trucks. A friend said, "You can't do that because Tonka is a trademark." I knew enough at the time that the controversy and press would be beneficial even if I eventually had to drop Tonka from the name.

This new Dan Mangan video is for the excellently-titled "About As Helpful As You Can Be Without Being Any Help At All" from Oh Fortune.

This is Crocodiles' fun, cool song called "Sunday (Psychic Conversation #9)". It's from their forthcoming album Endless Flowers, which is out June 4 or 5 depending on which side of the ocean you live on.

And here's the album teaser if you're jonesing for more.

And you can listen to the title track here.
Tags: crocodiles, new releases

A while back, I posted the new Yuck song "Chew". Around the same time as I wrote that post, I discovered this video by Parakeet, Yuck's bassist's project.  Here's the video for the track "Tomorrow".

You can download the song here, where I stole the photo.
Tags: parakeet

I caught an enthusiastic set by The Giant Baby at The Cameron House for the release of their third album Star. This was my first time seeing this band and they rocked their way through a marathon three set show that showed off each band member's talents and their penchant for classic, guitar-driven rock. 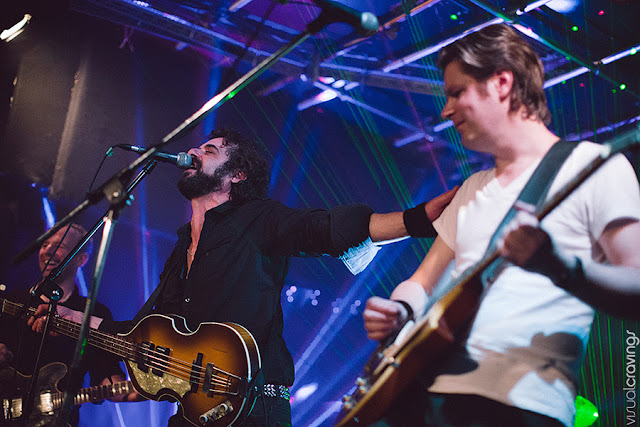 The songs deliver soaring vocals that at times could be compared to Bono or Luke Pritchard from The Kooks, the guitars alternately crunch and scream, with some delay-laden effects that are reminiscent of The Edge. Their no nonsense song writing and overall approach bring back classic rock of the 70s and Canadian rock giants like The Tragically Hip with whiffs of Gordon Lightfoot. They have a back-to-basics, anti-hipsterism vibe that puts them into a "being cool by not being cool" category. 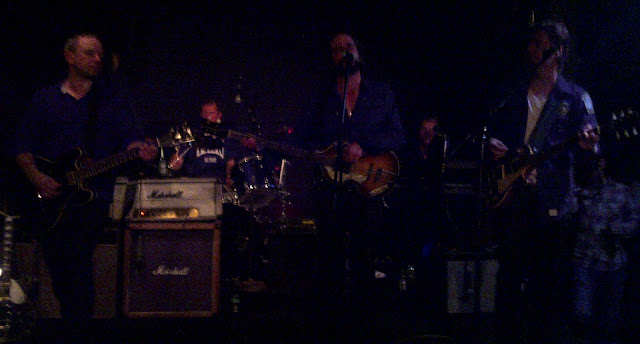 I'll let the music speak for itself at this point.  Here are a few tracks from Star.

"Want You To Myself"


"Even though You're Safe"


They played some other stand-out songs that I can only assume are on their earlier releases. You can hear some over at cbc music.

The crappy live photo in this post is an original pic by me. The other one was provided by the band.
Tags: the giant baby

Here's Alabama Shakes with an instant classic soul number called "Hold On". I imagine they would shine in a live setting. Sorry I missed them in their recent Toronto stop at Lee's Palace.

And their appearance on Letterman.

The album, Boys & Girls, is out now.
Tags: alabama shakes

And now, a video for that Maxïmo Park song I posted a few days ago

I seem to be doing a "Garbage" and posting lots of stuff from the new Maxïmo Park album The National Health, which is coming out June 11. In case you missed it, there was the initial announcement and first teaser track, then there was the first single, "Hips and Lips", now there's the video for the first single.

Check it out. It brings fan video to a new level. Cool.

Walk the Moon are another discovery of my miscellaneous web wanderings. Their big-label, self-titled début is out June 19. Here are a couple of tunes.

An acoustic version of "Next in Line" from Jimmy Fallon.

I recently posted about the live excellence of The Joy Formidable. They proved it for an audience at the YouTube Studios. Check it out here:

A while back, I received a nice email from Dermot O'Leary, an Irish singer-songwriter who performs under the name Ican Ican't. His songs feature easy-going melodies and guitar playing, they sound familiar without recalling any other artist in particular. These songs are perfect for summer nights, campfires and coffee houses. And he seems to like cats, which is fine. I like cats, too.

"I Don't Care What You Think Of Me"


If you like what you hear, you can grab the album at Bandcamp.
Tags: ican ican't


Adam Yauch, aka MCA, of the Beastie Boys has passed away at the age of 47. Thanks to Adam for fighting for our right to party, for the music and the activism. Rest in peace.

"Sabotage" was always one of my favourite songs to rock out to at The Phoenix in my younger days.

Ron Hawkins recently performed with the Do Good Assassins on CBC Radio 2.

"Dead Man" from 10 Kinds of Lonely

Gaslight Anthem have just let us hear "45" a new song from their forthcoming album Handwritten, which is out on the 24th of July. Check it out below - it's a fantastic song that I just keep playing over and over. 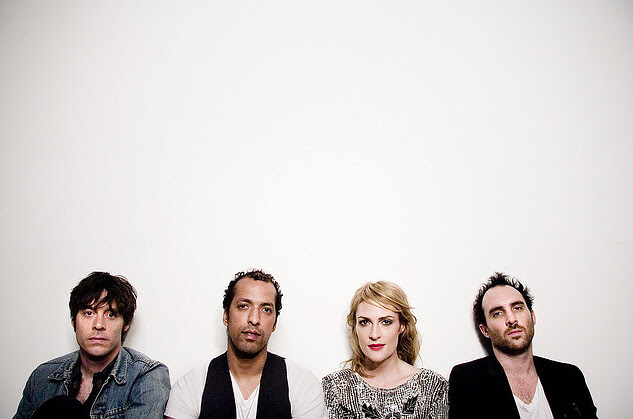 Metric have a new album called Synthetica coming out on June 12. They've just put up a new song called "Youth Without Youth" and accompanying commentary for our listening and dancing pleasure.