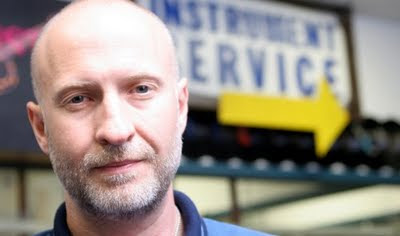 In previous Origins posts, I've written about Husker Du and Sugar. Now it's time to address Bob Mould. What can I say about Bob Mould? He's been an amazing influence on my songwriting and guitar playing. His music, from Husker Du to Sugar to his solo material has been inspirational and consistently enjoyable. He's grown into a person who seems comfortable in his own skin, very down-to-earth, and genuinely happy. He's had his share of rough spots as well, drug and alcohol dependency, and he blames himself for Husker Du's manager's suicide.

After Husker Du broke up, Bob Mould started putting out solo material. It has been great to watch the progression in his career as he moved through classic confessional songcraft, to dance music and back again to alternative rock. [Aside: I'll confess my discomfort with genre tags like alternative and indie, but often fall back on using them to describe certain styles, time periods and esthetics.] Bob is also working on an autobiography which I will be picking up as soon as it is released.

Here's a video for "See A Little Light" from Bob's first solo album Workbook. Bob has said that he considers his latest, Life and Times, as being a return to the style of songwriting on Workbook, twenty years later.

Here's a video of Bob performing "I'm Sorry, Baby, But You Can't Stand In My Light Any More" from Life and Times.

Bob has announced tour dates and will be hitting Toronto's Mod Club on October 5. I saw their show there for The District Line tour and it was amazing to see Bob in such great form, playing songs from across his career. The Mod Club is one of my favourite venues for live music in Toronto and I'm very much looking forward to the October show. Other tour dates are at www.bobmould.com
Tags: bob mould, husker du, new releases, origins, songwriting, sugar, tour dates
Newer Post Older Post Home