Editors New Release, In This Light And On This Evening, On Its Way 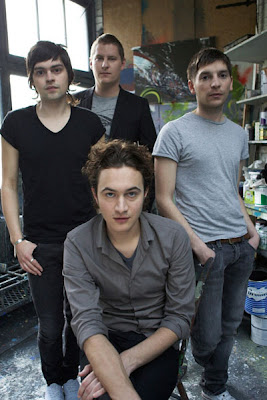 Ever since I heard "Munich" from the 2005 release The Back Room, I've been hooked on Editors. It's solid British rock with a dark edge. Tom Smith's deep voice and delivery inevitably lead to initial comparisons to Joy Division, but once you get to deeper listening, Editors' individuality emerges. Their second album, An End Has A Start, was released in 2007. This album upped their game considerably, with singles like "Smokers Outside The Hospital Doors", "An End Has A Start" and "The Racing Rats".

Originally I had heard that the new album, In This Light And On This Evening, was to be released on September 21. Amazon UK has the release date posted at October 12. I think this latter date is more likely to be correct since the Editors home page has a countdown to some 56 days from the time of this writing. With several concerts to attend and new releases I'm looking forward to, it looks like October will be a busy musical month.

A while back, Chromewaves posted that “Editors’ Tom Smith keeps up the sci-fi soundtrack talking points in discussing their new record". Based on this and some other articles I've seen around the web, I think we're in for a very different sounding album from Editors. Somehow, I'm still confident it will be great.

European tour dates have been announced. Looks like we'll be waiting for winter, or I'd guess more likely spring before we see Editors touring North America. That actually gives plenty of time to become intimate with the album and ready for the concert experience.

Editors, or their record company, don't want me to embed videos, so here are links to "Munich" and "Blood" from The Back Room plus "Smokers Outside The Hospital Doors", "An End Has A Start" and "The Racing Rats" from An End Has A Start. Or you can go straight to their video page and watch even more!