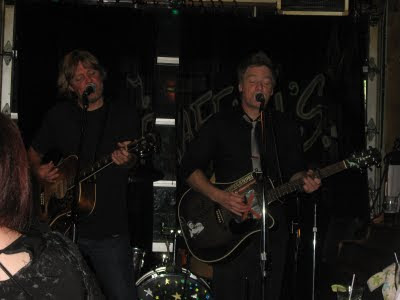 Ron Hawkins is many things - singer, songwriter, guitar player, painter - but first and foremost he is a storyteller. Many of the greatest songwriters are storytellers at heart. Ron's songs are full of characters that he brings to life with a few words combined with his melodies and chord progressions. I think that this ability to create interesting and instantly understandable characters in well-written songs is his greatest strength as a musician. As I've mentioned before, when I posted about these gigs and the release of the new album I am a huge fan of Ron's music and his music has been an influence on my own. I could listen to Ron sing his songs and play the acoustic guitar for hours and hours.

I saw Ron perform on Saturday night as part of a series of four concerts he put on to celebrate the release of his new album, 10 Kinds of Lonely. He performed a mostly-solo acoustic set at Graffiti's in Kensington Market.

The Benvereens were the opening act, and while I came in during their set, I heard them perform some excellent acoustic-based songs. They were giving away CDs but sadly I was not one of the lucky recipients. If memory serves, they mentioned that they'd be heading back into the studio this fall. The music on their myspace sounds much more laid-back than they came across live. Hopefully, they'll capture more of that live energy in the studio. I'll be keeping my ears open for new material from The Benvereens, although I do wonder why they've named themselves after the actor Ben Vereen, unless of course there's another story behind the name.

Ron performed solo for the first set, then he brought up 2/3 of The Benvereens for the first few songs of the second set, and later was joined by his cohort from Lowest of the Low, Stephen Stanley. Ron performed many songs from the new release, as well as songs spanning his career. There were Lowest of the Low songs like "Hand of Magdalena", "Letter from Bilbao", and of course "Rosy and Grey". If memory serves (sometimes it does and sometimes it doesn't) Ron only performed one Ron Hawkins and the Rusty Nails song - "Beautiful Chemistry". There was material from his previous solo release, Chemical Sounds, such as "From the Alta Loma Hotel", "1-800-Radio", "1994" and "Peace and Quiet".

The performance was very powerful, with everyone in the bar giving Ron their full attention. While he did crack some jokes and tell some funny stories and there was much laughter, there was a seriousness to the tone of the performance overall. I'd be interested to know if the other nights came across that way.

Songs from the new release that he featured included "Don't Be Long", "Genevieve" (a great song about running off to Montreal with Genevieve to form a band, among other things), "Turned Around", "The Prodigal Sun", and "10 Kinds of Lonely" (with the communal whistle part) among others that I mention below.

One song from 10 Kinds of Lonely that Ron played on Saturday, "The Rain's the Thing", was very poignant with the very rainy summers we've had the past couple of years. Coupled with the mist that filled the air behind him through the window on Baldwin Street, the song and the weather fit perfectly.

A few songs came with their own songwriting stories:

Ron told many stories and reflected back on his past. He talked about the songwriting process, how he incorporates influences into his music, and his musical past. He mentioned trying to sound like Steve Earle, whether he sounded like Hall & Oates among others, how the whole new album was sort of sparked by parody, and told a great story about his tour with Weddings, Parties, Anything, who covered the Lowest of the Low song "Rosy and Grey" several years ago and made it very popular in Australia.

Ron also performed a song that he's never released on an album, called "Propellers". It's a great song that truly deserves it's spot on a release.

When I purchased my copy of 10 Kinds of Lonely from Ron (I hope you got the bike - you had to be there), I asked why he hasn't sold his music through iTunes or Emusic. Ron told me that he is planning to get his music on iTunes, so we'll be on the look out for that. I think this is a great step for him to breaking out to an even larger audience. For now, you can order his new CD, and any of his previous releases, from his website.

The new CD features more bare-bones arrangements than his previous release, Chemical Sounds. It's definitely less of a rock album and more blues- and country-influenced with slide guitars, Hammond organ, country harmonies and even a banjo. Ron has always played with genres, from Celtic to grunge to blues and bluegrass to gangster-era-tinged rock to folk, so finding him playing with genres again is no surprise. 10 Kinds of Lonely is definitely a Ron Hawkins album, which means the lyrics and songwriting is great and the stories are engaging. It's sure to grow on me more and more as it moves into heavy rotation on the iPod.

Over at Wildy's World blog, there's an interesting interview with Ron and a review of the new album. Check it out.

I can't find any video or track samples from the new album to share with you at this time. There were a few folks video-taping the event so hopefully someone will post some videos to youtube. In the meantime, here's a video from a solo performance at the same venue from a couple of months ago.