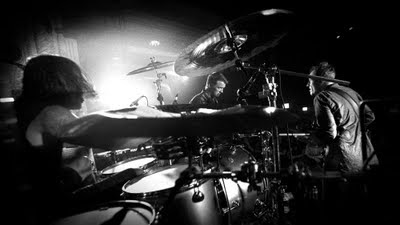 I had seen the band name The Big Pink floating around the Interwebs recently, but hadn't heard any of their music. I saw a post over at Artrocker that echoed my feelings about the name and its origin with The Band. Artrocker posted this video and I think it has a great sound and a great hook. Go to The Big Pink's site and they'll trade your email address for an MP3 of "Dominos". The album, A Brief History of Love, is due out September 15. Emusic has some singles, so I'm hoping they'll get the full album.

Spinner has the ten Polaris Prize nominated albums available for streaming until the prize is won on September 21. Go check it out.

James has recently put up a free mp3 on their site. It's for a song called "Not So Strong" and they say it's semi-legendary. "Not So Strong was first performed during a low-key gig at Hoxton’s Bar and Kitchen in June 2007, and became a regular feature on the setlist throughout the rest of the year. It quickly established itself as a fan favourite, and many of you expressed shock and disappointment when it did not appear on Hey Ma." Great song.

If you're interested in the history of Canadian music, you may be interested in two new documentaries from the CBC. By the time of this post, you've missed the first airing of the first episode, but it looks like there are repeat airings on CBC Newsworld.

I've been enjoying the new single, "The Fixer" from Pearl Jam. They have another new one called "Supersonic". I kind of lost track of Pearl Jam around the time of No Code but it looks like I'm catching up with them again. Backspacer is out September 20. If you pre-order the album from iTunes, you get "The Fixer" right away.

Well, everyone's been freaking out about Them Crooked Vultures (pictured above). They are the newest supergroup comprised of Josh Homme, Dave Grohl, John Paul Jones, and based on the videos linked below, a couple of other guys. Youtube has bits of a couple of songs from the official TCV channel. There's one called "Elephants" and a short and long version of "No One Loves Me and Neither Do I". Stereogum has live videos in features 1, 2, and 3. After listening, I can hear what the fuss is about. They rock hard. They also played with Arctic Monkeys. Spinner's got the scoop on that show.

Think it's too early in the year for lists? Never. Pitchfork has a feature "P2K: The Decade In Music". Highlights include the "Top 500 Tracks of the 2000s" and the "Top 50 Music Videos of the 2000s".  Stereogum's got some good analysis.

And R.E.M. has a great sounding live version of Accelerate's "Living Well's the Best Revenge". More info on the coming live album on remdublin.com.

Living Well Is The Best Revenge