New Foo Fighters video and the return of RAWK! 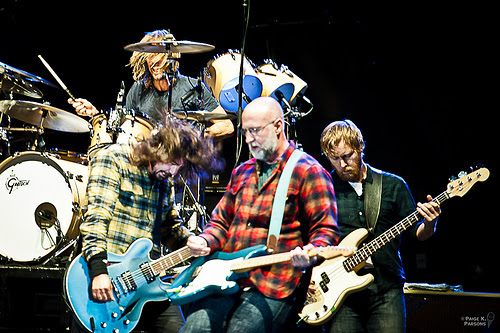 Foo Fighters have released a video for "These Days" from their most recent album Wasting Light.  In related news, Dave Grohl told Billboard:

"I don't think there's anything wrong with rock at all. It's overlooked. And right now, the current musical climate is not unlike it was back in 1991, right before Nirvana got popular. The late '80s was full of over-produced pop that kids had nothing to grab hold of -- they had no way of connecting to this hair metal band singing about fucking strippers in a limousine on Sunset Boulevard. Who can relate to that? Then you had a bunch of formulaic pop songstress bullshit, and music was boring. And then a bunch of bands with dirty kids got on MTV and rock'n'roll became huge again. And I feel like that's about to happen. Something's got to give. It can't be song contests on television for the rest of our lives. It can't be the same playlists on every radio station for the rest of our lives. It can't be music made entirely by computers with people talking over it the rest of our lives. It can't go that way, it just won't.

Someone asked me recently, "What do you think the problem with the music industry is?" I said, take the Adele record, for example. It's an amazing record and everybody's so shocked that it's such a phenomenon. I'm not. You know why that record's huge? Because it's fucking good and it's real. When you have an artist singing about something real and she's incredibly talented, it deserves all the rewards it gets, it's a great record. Now imagine if all records were that good. Do you think only one of them would sell? Fuck no! All of them would. If all records were that good the music business would be on fire, but they're not. A lot of people are promoting records that are just throw-it-against-the-wall-see-if-it-sticks meaningless bullshit. Everybody has the responsibility to do the right thing and promote artists that mean something."

These guys might be the last band that would make me want to go to a stadium rock show.