Kasabian put on a fantastic show. They were originally supposed to play The Phoenix here in Toronto. That sold out so fast they were booked into Kool Haus. That sold out as well. I was lucky enough to be a ticket holder from the Phoenix show.

And they did not disappoint. Even for a short guy near the back who could only catch glimpses of the band when the tall people's heads aligned to give me a sight line they were thoroughly entertaining. They had a good light show, they displayed the tight playing of a seasoned band, and they squeezed really good sound from a concrete box of a venue. I should mention that based on past experiences, I usually try to avoid the Kool Haus for the venue's many not-so-stellar qualities such as the sight lines and not-so-wonderful sound. 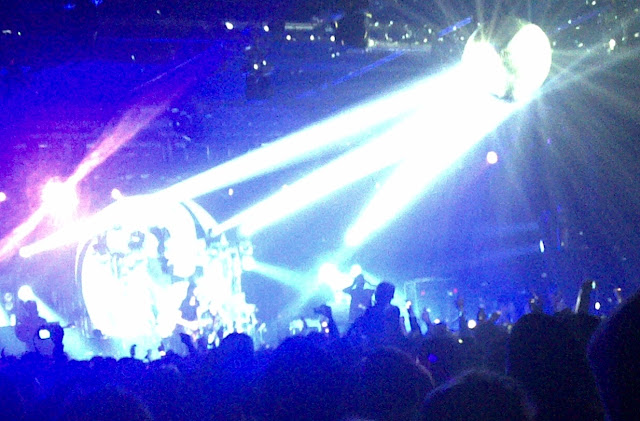 They played a great mix of tunes from across all of their releases and were so engrossing that when they wrapped up the main set, I remarked, "Wow. Short set". In fact it wasn't a short set, it was just so well paced and performed that went by effortlessly. The lads came back and rocked us through an encore and the night was done.

We only caught the end of the opening act Hacienda, but I like this song on their site.  It's called "Savage" and it's from their upcoming album, expected this spring.

Here are some of my favourite Kasabian toons.  One from each album.

"Club Foot" from their eponymous début

"Shoot the Runner" from Empire

The photos in this post are original pics by me, not the usual professional pics stolen from some other web site.  You can tell the difference original art makes.
Tags: concert photography, concerts, hacienda, kasabian
Newer Post Older Post Home