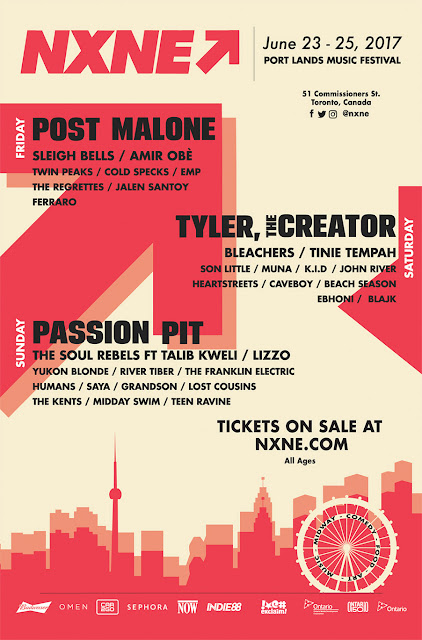 It's coming up really soon! June 16-25 to be exact. It's the 23rd Annual North by Northeast music festival, more commonly known as NXNE or Northby. Yup, this year it's expanding to ten days, with a dynamic selection of music, gaming, comedy, and more. I hope to be there to capture all the action. Check out the coverage from last year, in case you missed it.

NXNE returns to the Port Lands for three days from June 23-25, 2017. NXNE Port Lands will include two main stages, art installations, sponsor activations, and comfortable places to chill between acts, as well as a comedy tent, and carnival rides.

"In it's first year the NXNE Port Lands saw thousands of attendees in two days," said Michael Hollett, President and Managing Director of NXNE. "Our growth and expansion for 2017 are based on the success of last year with cool programming from indie rock to hip hop to soul and much more each day."

Let’s hope they found a way to pipe in fresh water for this year!

New for this year is a curated club series featuring line-ups hand picked by Moe Berg of The Pursuit of Happiness, Ian D’Sa of Billy Talent, Brendan Canning of Broken Social Scene, Shad, Leah Fay of July Talk, Nick Rose, Tasha the Amazon, The Dirty Nil, Rural Alberta Advantage and Raina Douris from Indie 88 and CBC. These shows are Monday through Thursday at venues including The Baby G, The Garrison, Cold Tea, The Rivoli, The Dakota Tavern, Bovine Sex Club and The Legendary Horseshoe Tavern.

From June 19-25, 2017 NXNE will host hundreds of new and established artists at over a dozen venues across the city for NXNE Club Land, including The Danforth Music Hall, The Legendary Horseshoe Tavern, and Adelaide Hall.

Here are some of the artists I'm most looking forward to:

And some inspiration from the curators:

The Pursuit of Happiness