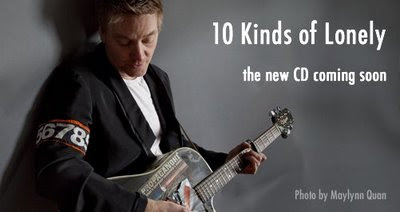 I was, and still am, a huge Lowest of the Low fan. If you're not familiar with them, they were part of a first wave of indie music in Canada. The Low, along with artists such as Barenaked Ladies and Moxy Fruvous sold huge numbers of their tapes, and later CDs, at shows. Record stores began to have indie music sections. My old band's tape was one of them. More history of the band can be found at their wikipedia page.

The other day, my in-box was graced with an email from Ron:

This will seem like Christmas eve... or the day you found out John Lennon was killed, depending on whether or not you like my new disc.

But anyhow... they're here!

And to send them off with a bang I've got a series of shows lined up at Graffiti's in Kensington Market, Toronto.

Two shows are scheduled for Friday August 7th - a matinee (all ages) at 6pm and an evening show at 10pm.

And one show on Saturday August 8th at 10pm.

Come on out, get a copy of 10 Kinds of Lonely and see openers Too Many Sisters and the Benvereens.

The disc will be available through VictimlessCapitalism as of Monday August 10th as well.

Hope to see you out.

Tickets for the show can be purchased from the online store at Ron's site.


A classic from Lowest of the Low's first CD, Shakespeare My Butt called "Salesmen, Cheats and Liars"


See you at the show!