Best of: My favourite Concert Pictures of 2015

Last year, I posted my top 10 favourite concert pictures of 2014. This year I have 25. That's either because I've taken more great shots this year or I've become massively less decisive. No matter which one is true, here are my favourite concert pictures of the past year. I've put links the original posts on the concerts I mention so you can see my full portfolio of pics for each one, if you're so inclined. 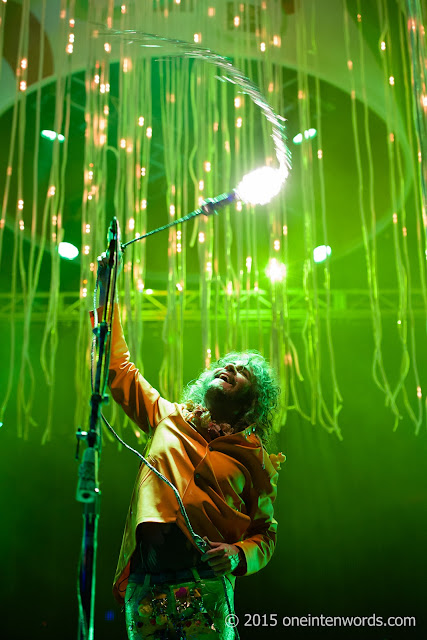 Panamania hit Toronto in more ways than one. There was the overall feeling of pride that came with Toronto hosting the Pan Am Games and Parapan. There were the amazing feats and athletic achievements of those participating. There was hostility over the high occupancy lanes that clogged our highways. There was the arts and culture program of the Pan Am Games that brought great artists to our city centre for some amazing free shows.

The Flaming Lips are a live spectacle no matter where they play. I caught them and photographed them for the first time at Riot Fest 2014. This Panamania show seemed extra special because it was right in our city centre, it was free, it was in celebration of our city and the Pan Am Games, and Wayne Coyne and the band were in top form. I love this particular picture because of the green background, the position of the swinging light and the look of glee on Wayne's face. It captures the mood of the show so well. 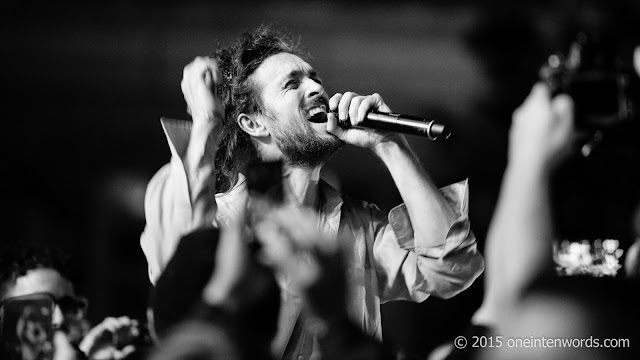 The Toronto Urban Roots Festival is the festival highlight of the year for me. I walked in as someone who was not a big fan of Edward Sharpe and the Magnetic Zeros but as someone who wanted to catch their show with an open mind. Singer Alex Ebert is a fantastic front person who the fans and the camera love. He came out into the crowd a couple of times and I was lucky enough to capture this image of him right in the middle of a crowd of fans and photographers. As all these photographs strive to do, it captures the feeling of being there. 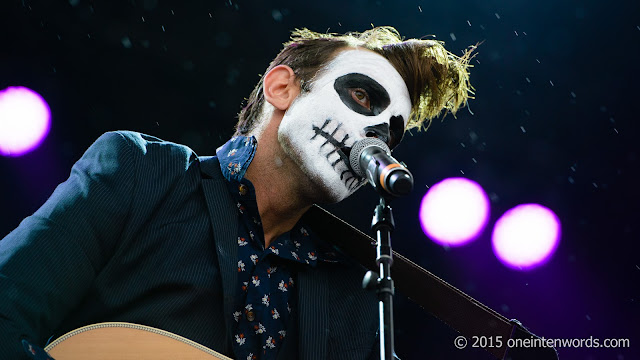 The Strumbellas were on my must-see list for this year's TURF because I had heard so much about their live shows and I've missed them every other time they played. Simon Ward's look for this show was so unique compared to every photo I've seen of him before. This shot captures that look as the rain started to come down. Great show, great band and a band that was worth staying in the rain for. A few weeks back, I caught them at The Horseshoe for another great show. 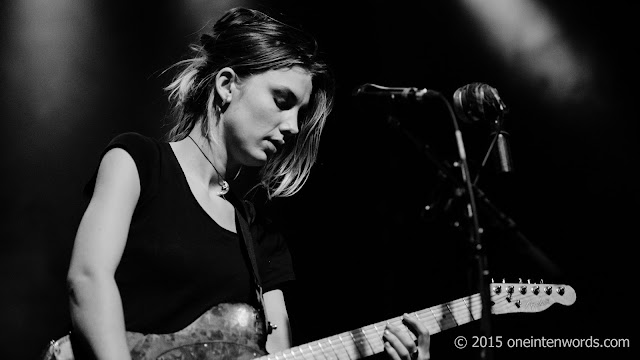 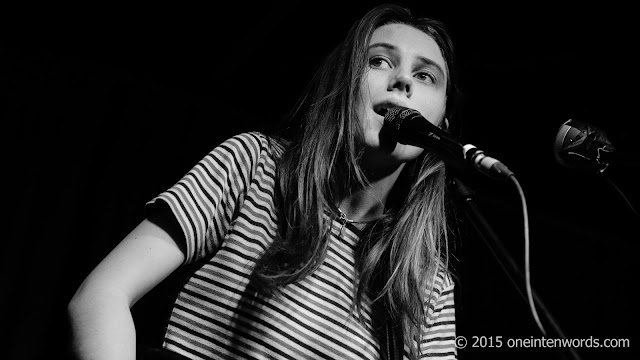 I've seen and photographed Wolf Alice each time they played in Toronto this year. First at The Drake Underground, then at Adelaide Hall, and finally at The Phoenix Concert Theatre. As the crowds grew, so did the band's stage presence. I think these two pictures capture that with images from the first and most recent shows. Wolf Alice became one of my favourite bands, with some of my favourite songs and certainly my favourite album of 2015 in My Love Is Cool. (Sorry for the spoiler of my favourite albums of 2015.) 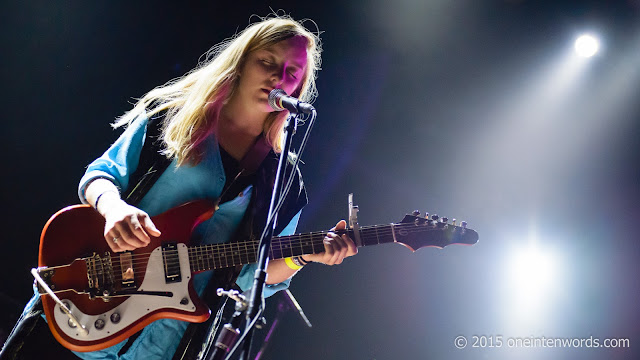 This was my first year shooting NXNE. Blonde Redhead's Opera House show was one that I wanted to make sure I attended. Also on the bill was Anamai. I love this picture for the way it captures Anna Mayberry, deep in delivering her music, with the atmospherics of the smoke and light on the stage. 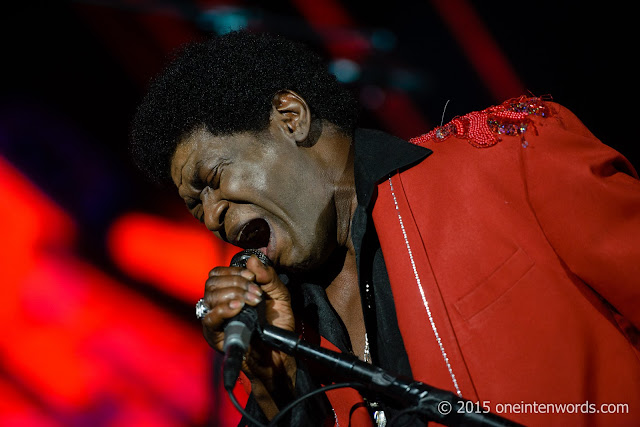 Panamania was pretty exhausting, with so many acts to see. A fellow photographer told me that I shouldn't miss Charles Bradley so I dragged my tired self down to Nathan Phillips Square to catch his show. And I'm certainly glad I did. His passion is easy to see and hear. What a great performer. 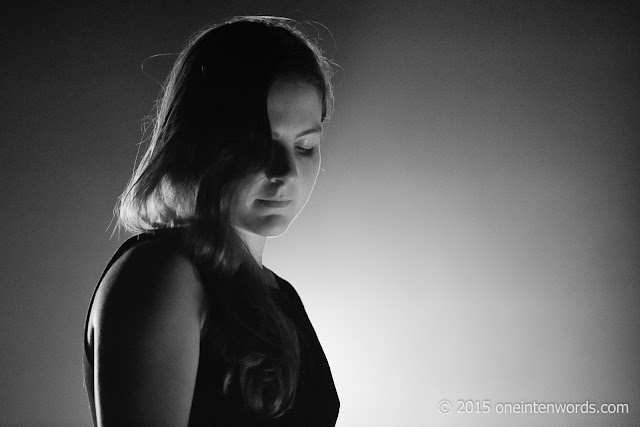 Whine. Whine. Whine. The lighting at Noah Gundersen's Opera House show was certainly not that photographer-friendly. But it did provide the setting for this photo of Noah's sister Abby. 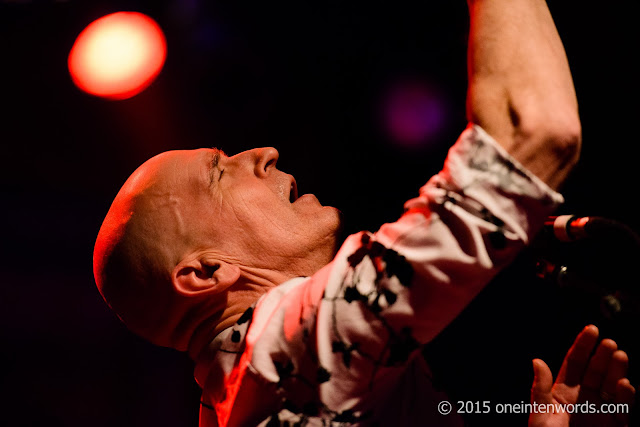 I fondly remember many Saga hit songs from my early days of music listening. Getting to see them at The Phoenix Concert Theatre was a cool experience. This shot of singer Michael Sadler really sums up the energy and emotion he brings to every show. 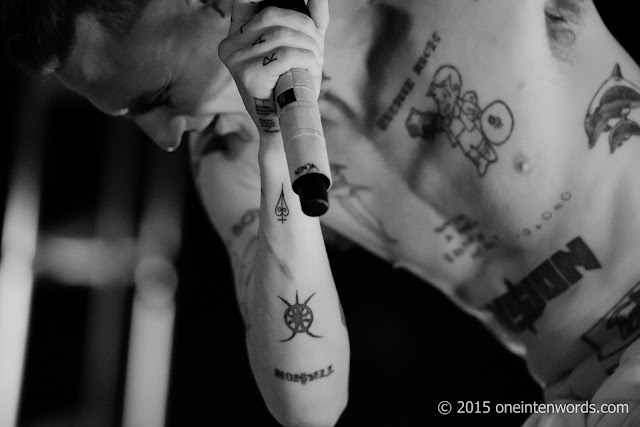 I've mentioned before that the striking look and sound of Die Antwoord make them a band that I will always photograph if given the chance. My first time shooting them was last year at Riot Fest 2014 and I got the chance to do it again at this summer's Time Festival. I love this shot of Ninja - the mic being the focal point and his tattoos bringing lots of visual interest. 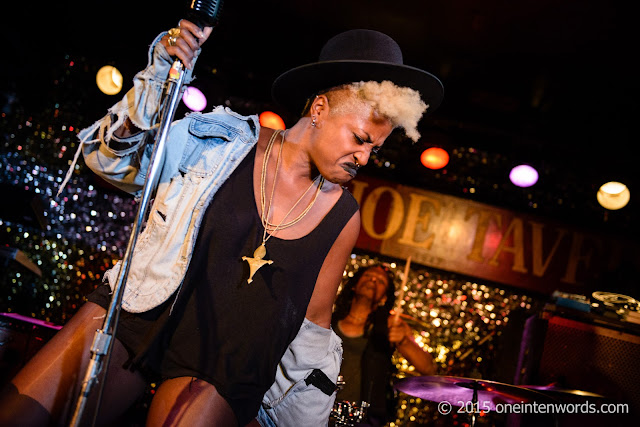 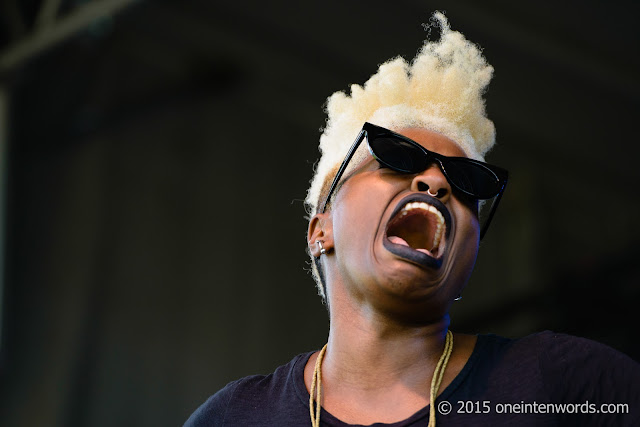 Sate became one of my favourite artists this year and it's all thanks to TURF. They curate such an amazing line-up that presents bands that are huge draws with up-and-coming artists that audience members are sure to fall in love with. I saw Sate perform at The Legendary Horseshoe Tavern opening for Fishbone and again on the third day of the outdoor festival on the South Stage. At both shows, Sate and the band delivered, high energy, soul and lots of love. The hardest part for me is narrowing down the amazing photos. 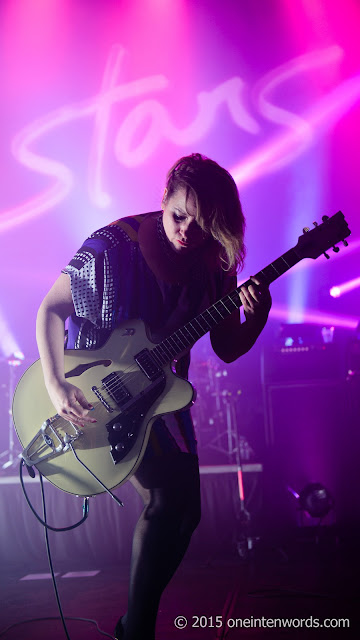 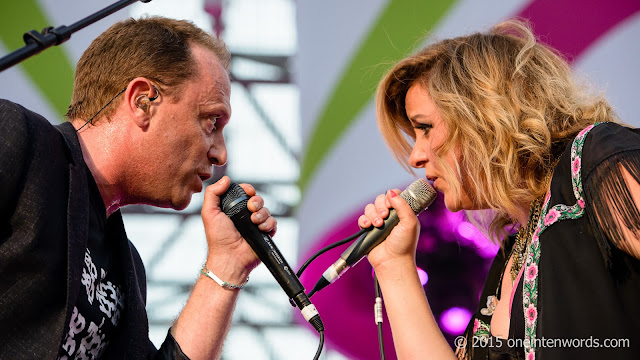 Stars are easily one of my all-time favourite bands. I've photographed them a number of times. These particular shots are my favourites from their show at The Danforth Music Hall and at Panamania. As I write this, I'm preparing to go see them celebrate the 10th anniversary of their amazing Set Yourself On Fire album at The Phoenix. This show I attend as a fan, not a photographer. 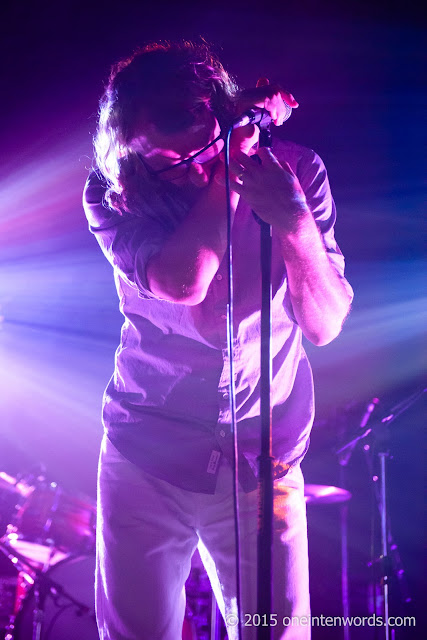 The National are an amazing band and one of my personal favourites. I was honoured to have shot them at last year's Riot Fest and I was excited to shoot singer Matt Berninger again at the very sold out Opera House as he came through town with El Vy, his project with Brent Knopf. I liked this shot because it captures their unique light show and a pensive moment for Matt. "Return to the Moon" ended up in number 21 on my favourite songs of the year list. 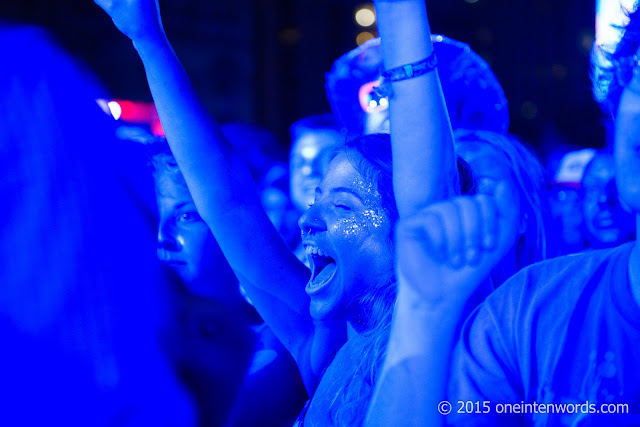 I don't usually shoot the crowd at a show. It seems a little intrusive and voyeuristic to me. But while waiting for The Flaming Lips to hit the stage at Panamania, I saw the look on this fan's face and just instinctively brought the camera to my eye and captured the moment. The joy and enthusiasm on her face perfectly captures the mood of so many fans at this great show. 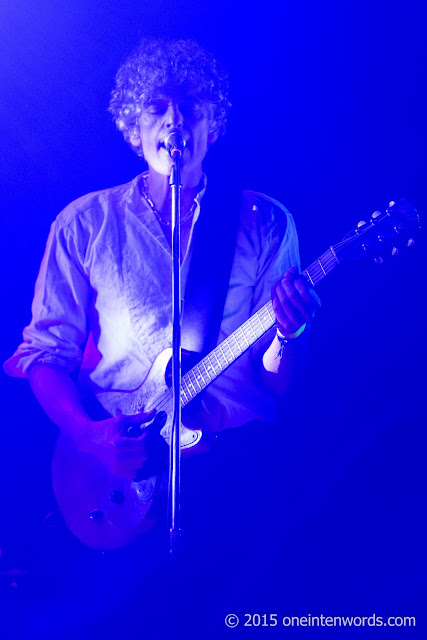 As I mentioned above, Blonde Redhead's NXNE show at The Opera House was a must-see for me, especially since I had missed their last show at The Horseshoe. This shot is cool because of how it catches Amedeo Pace surrounded by blue light, almost being consumed by it. 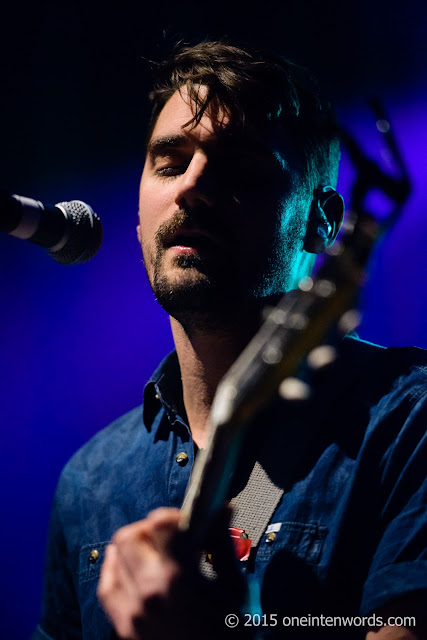 Hey Rosetta! opened for Stars at the above-mentioned Danforth Music Hall show. I just like the way this shot captures singer Tim Baker at the mic, fully absorbed in the music he and the band are making. I previously shot this band at TURF 2014. 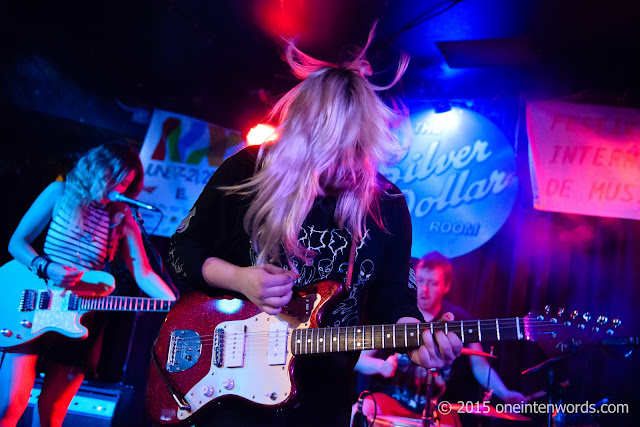 No Joy are all about glorious noise and energy. They created tons of each for those of us in attendance at their NXNE show at The Silver Dollar Room. Not much more to say besides that I feel this shot captures the mood of that show. 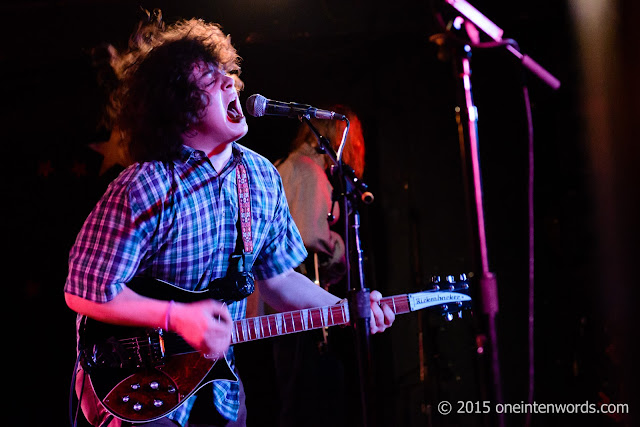 I've seen and photographed The Districts three times now. The first was when they opened for White Denim at The Horseshoe, the second was when this shot was taken at their own headlining show at The Horseshoe and the third was when they headlined at Lee's Palace. Singer Rob Grote is a ball of energy on stage and it's hard to capture him as anything but a blur. This shot from side stage captures his live energy and enthusiasm. Their 2015 release A Flourish and A Spoil ended up yielding a few tunes on my favourite songs of 2015 list as well as a spot for the album on my best of list. 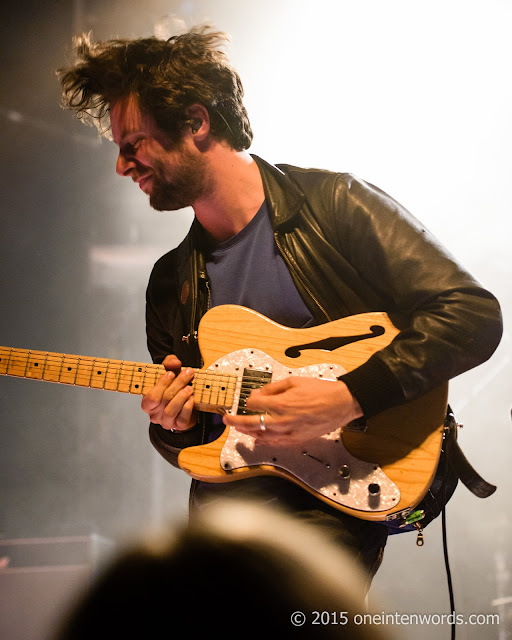 Albums by The Maccabees have been in my library since 2007. I finally got the chance to see them live this year when they played at The Mod Club. This shot of Felix White embodies the unflagging enthusiasm and joy he put out during the show. 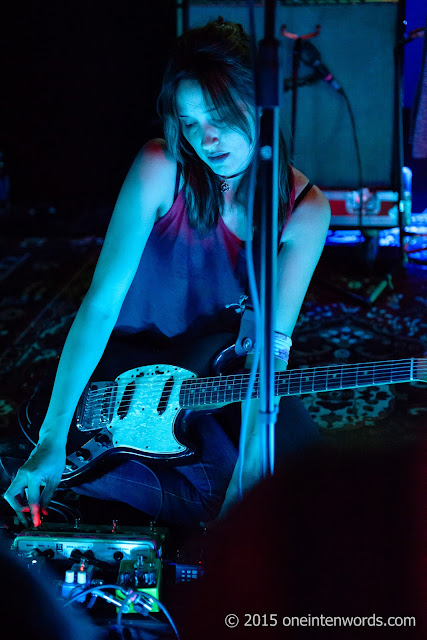 There's always something cool about when a guitarist gets down on the stage floor and starts manipulating the noise and feedback emerging from their amp with their effects pedals. I've captured a few of these, but this shot of Warpaint's Theresa Waymen from their NXNE performance at Adelaide Hall is my favourite. It was a fantastic show and this shot reminds me of the best of it. 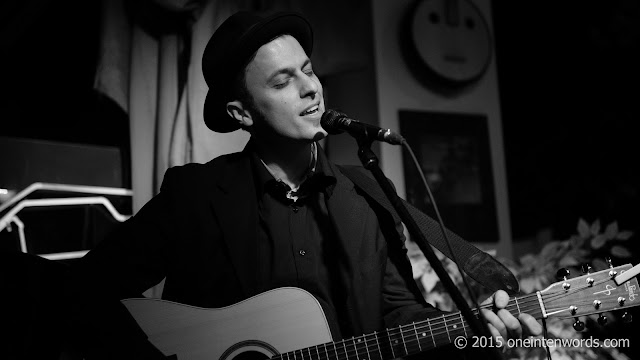 Mark Martyre's show at Musideum was one of the most unique shows I've been to. This shot captures Mark delivering his personal and captivating tunes in this one-of-a-kind venue. I love all the black and white tones that came through in this shot. This performance also shows me that sometimes less is more, since I only took 19 shots in total and came out with some great ones. 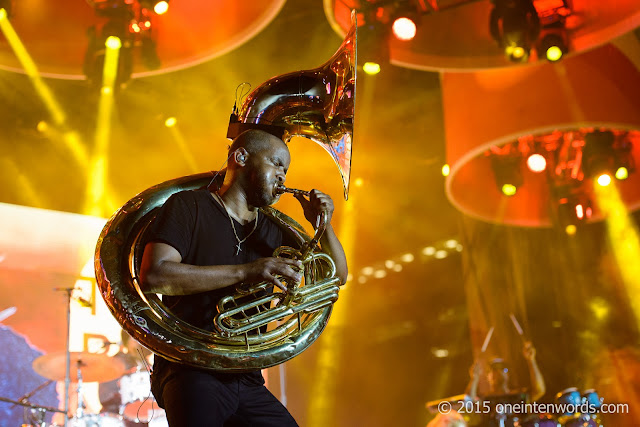 The Roots drew a huge audience to their Panamania show at Toronto's Nathan Phillips Square. I'm so thankful for photo pits because without them I wouldn't be able to get anywhere near a band like this. I love so many of the shots I took, but this one is unique in many ways, including the fact that you just don't see many tuba players in bands these days. It's a great visual. 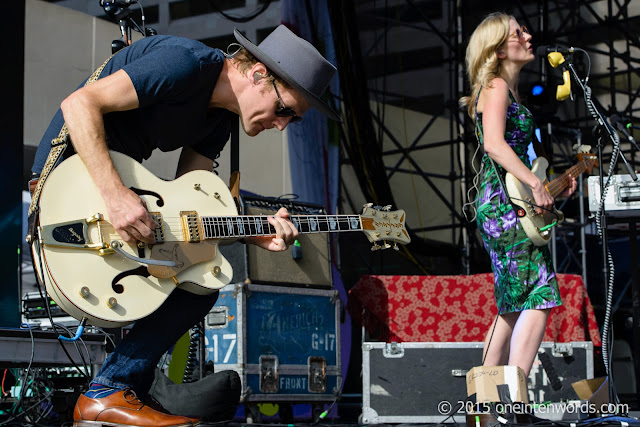 Whitehorse had a late afternoon slot on the Panamania stage the same day as The Roots' performance. I like this standout shot that captures both Luke Doucet and Melissa McClelland in action.

Now I look forward to 2016, the music it will bring and the shows I will get to see. All the best to everyone who's ever taken a moment to visit the site, the promoters who let me in to shows, the venues and their great staff who help make my vision come to life and. of course. the musicians for creating the music and putting on the performances that inspire.
Tags: best of, charles bradley, concert photography, concerts, edward sharpe, favourites, noah gundersen, nxne, panamania, saga, sate, stars, strumbellas, the flaming lips, the roots, turf, warpaint, whitehorse, wolf alice
Newer Post Older Post Home