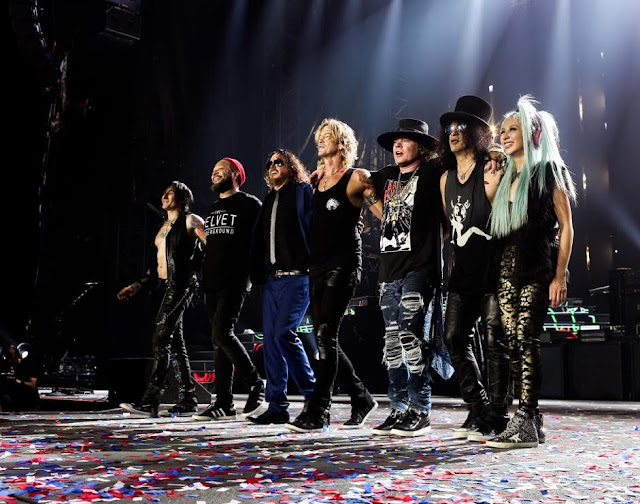 ​Last night, July 16, I got the unique and once-in-a-lifetime experience of seeing Guns N Roses live at The Rogers Centre. It marked the only Canadian stop on the current Not In This Lifetime tour. I had the opportunity to see GNR open for The Cult at The CNE Stadium back in the day, but didn't end up going. I'm a huge fan of Appetite for Destruction but my fandom tailed off with Use Your Illusion, so I didn't end up seeing them live after that. With three original members in the fold, I took this opportunity, and maybe last chance, to see the band perform. Short story: they were awesome, the sound and playing were great, the show was solid and it was a fantastic time.

After listening to the booming sound of various flavours of gunfire, the Rogers Centre went dark and the sound of the Looney Toons theme emerged from the PA. A fan standing next to me kept repeating "I can't believe this." It was a sentiment of many, many excited and devoted fans who no doubt never thought this show would happen. Hell froze over. It certainly was a "not in this lifetime" show. The next thing you know. the Leafs will win the Cup again.

GNR jumped right into the songs that would most excite the crowd, or at least fans like me who hold Appetite for Destruction as a desert island classic and the pinnacle of GNR's discography, with "It's So Easy" and "Mr. Brownstone", quickly followed by "Welcome to the Jungle" after a brief stop in "Chinese Democracy". The stadium was filled with fireworks and fire and smoke and big-ass sound.

I'm a guitar player and was playing intensely when Appetite came out. Slash's guitar work was a huge stylistic and sonic/tone influence on me. Yes, I'd say that he's a guitar hero. Last night, his playing was incredible, the sound perfection and the variety of Gibson and B.C. Rich axes were wonders to behold. I remember learning to play every song on Appetite so seeing and hearing Slash play those songs live, and perform a fantastic guitar solo, was definitely the highlight of the show for me. The wah pedal got a huge workout, and "Rocket Queen" came complete with talk box guitar solo, an effect that we never really see or hear any more. At the end of "Civil War" Slash even snuck in the riff from Jimi Hendrix' "Voodoo Chile", which is perfect for his love of the wah pedal. 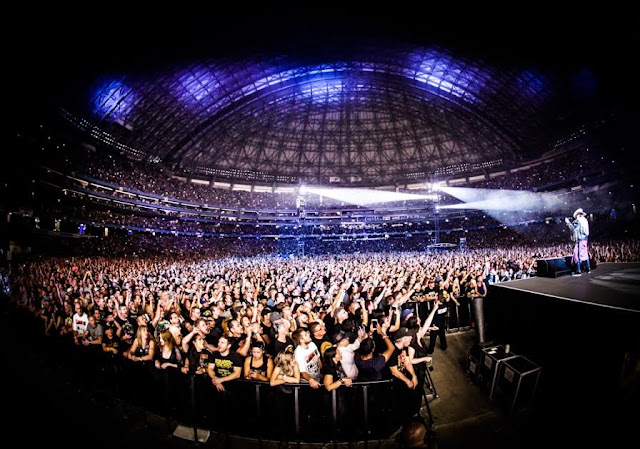 Slash sat in the spotlight for his solo, which of course was followed by the iconic riff that every young guitar player learns, and every guitar shop employee hates, the intro to "Sweet Child O' Mine". What a guitar player. The show continued its guitar-centric ways with a guitar cover of Pink Floyd's "Wish You Were Here" that allowed second guitarist Richard Fortus to step forward and shine. The tune then melded into the latter half of Derek and the Dominos' "Layla" with Axl taking to the piano.

The third original member in attendance, bassist Duff McKagan paid tribute to some recently fallen musical legends with the Prince symbol on his bass and his Lemmy shirt. Speaking of shirts, I think that Axl had more costume changes than Taylor Swift. We got to see a great variety of black t-shirts, hats and shades, and Axl's vocals sounded solid throughout the show.

Other fan highlights included their cover of Wings' Bond theme "Live and Let Die", "You Could Be Mine", "Civil War", "Out Ta Get Me", their cover of Bob Dylan's "Knockin' on Heaven's Door" and, of course, the classic "November Rain". The main set, which clocked in at over two hours, closed out with an awesome rendition of "Nighttrain". 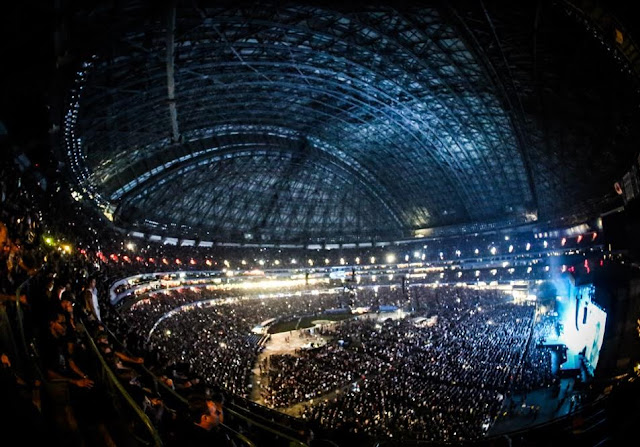 The encore consisted of "Patience" from G N' R Lies, a wicked cover of The Who's "The Seeker" and the closer we were all waiting for, "Paradise City". They returned a few minutes later for a final bow and we were off for the slow shuffle out of the venue. Check out the full setlist here.

The only glitch in the night was the absolute human gridlock that I experienced as I came into the 100 level of the stadium. It was near impossible to move and many fans took to climbing over barriers to get to their seats. I'm not sure if there were entrances that weren't in use or if that's the usual way at Rogers Centre. It's frankly been a long, long time since I've seen a show there and I don't think I've ever been on the floor before. This was all quickly forgotten once the show got underway.

This concert definitely goes into the memory banks as an iconic show that I never thought I'd get to see, on the scale of The Police show I saw when they first reunited back in 2007. This Guns N Roses concert was exactly what this kind of show should be; fantastic songs played well by a band that sounds great for a full house of dedicated fans.