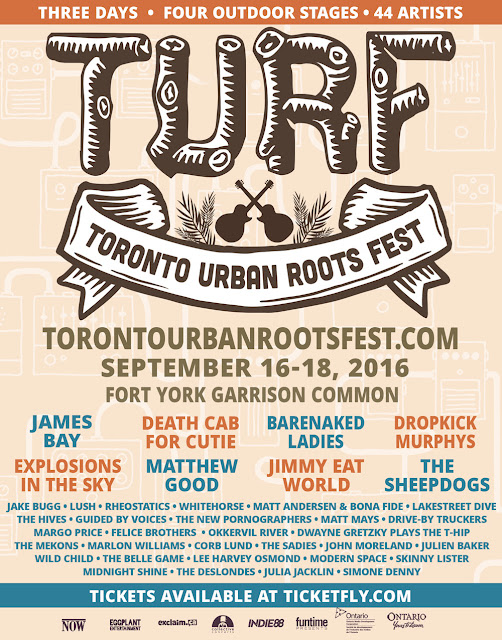 A few weeks back, TURF, The Toronto Urban Roots Festival announced the first batch of artists for the 2016 line-up including James Bay, Death Cab For Cutie, Barenaked Ladies, Dropkick Murphys, Explosions in the Sky, Lush, Okkervil River and Skinny Lister. Click here for my post on that announcement.

This morning, TURF announced the second round of artists for this year's festival including Jimmy Eat World, The New Pornographers, Whitehorse, Margo Price, Dwayne Gretzky (playing The Tragically Hip), The Sadies, Wild Child, The Deslondes, Simone Denny,  Lee Harvey Osmond, The Belle Game, Modern Space and Julia Jacklin. Click on the band name links above for my shots of the bands that I've photographed in the past.

Even more artist announcements are still to come, and pretty significant ones at that, based on the artist page on TURF's site. I've got some predictions, but I'm going to keep them quiet.

TURF is consistently my favourite festival of the season and this line-up looks to be fantastic. The festival takes place September 16-18 at Fort York Garrison Common in downtown Toronto. For ticket information click here.

Check out some music from these newly-announced TURF 2016 artists.